What Is HDMI CEC?

HDMI CEC is a way to connect all devices in a multimedia system setup with HDMI. HDMI CEC allows up to 15 devices to share settings and communicate with each other, to create a seamless home theater experience.

CEC stands for Consumer Electronics Control, a technology that allows the enduser to combine the settings of all compatible devices into one remote. Most of the core features between compatible devices are supported by HDMI CEC. Controls for playback, audio, and menu selection can all be synchronized across compatible devices, reducing the need for using the device specific remote for unique device features only.

HDMI CEC provides for most of the core features that can be found on remote control. Power, playback, audio, and menu selections all can be transmitted via HDMI CEC. There is no need to switch between remotes, one device remote can control all devices in the chain.

How Does HDMI CEC Work? 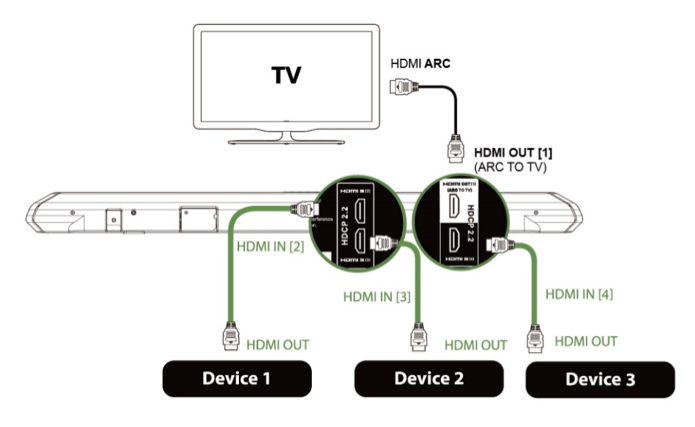 HDMI CEC uses any of the remotes to control an entire system. When using the remote from the TV to, for example, control a DVD player, the remote communicates with the TV to send a CEC signal via the HDMI cable to the DVD player.

In other words: whichever remote is used has the corresponding device effectively control the other devices it is connected to. They even can control a device asleep, and the HDMI circuitry is disabled, or a device that is completely powered off. That’s because CEC has a separate electrical signal from the other HDMI controls.

There are a lot of features that HDMI CEC enables. Here are a few:

Deck control allows the use of common playback commands such as play, stop, rewind, etc. for playback devices such as Blu-ray players, camcorders, and other media devices.

One of the most complicated parts of setting up a home theater system was having to calibrate the volume of all playback devices to be roughly equal across devices. HDMI CEC eliminates this problem by imposing an audio control for the entire system.

Power On and Power Off

In the past, one had to power each device on individually to use them and power them down individually when done. With HDMI CEC, the system standby feature allows the standby or power button to put all of the lined devices in standby mode.

Another feature is One Touch Record which allows one to record whatever is playing on the display device to a selected recording device. It is no longer required to route sources through a recording device.

HDMI CEC goes by a number of commercial names. Each one technically offers a slightly different menu of features, but the core functionality of having a designated pin in the HDMI plug is identical.

Bellow a list of some of the branded names of HDMI-CEC:

Most of the commercial brands include the word link (Aquos Link, BRAVIA Link, CE-Link, EasyLink, SimpLink, etc.), while some have unique names like Anynet+ (Samsung) and 1-Touch-Play (Roku).

Pros and Cons of HDMI CEC

There are plenty of pros to HDMI CEC and very few cons. While the pros outnumber the cons, there may be instances where it might be desirable to disable HDMI CEC or upgrade the system to one that uses eARC, which is a newer standard that improves upon HDMI CEC’s features while eliminating the need for setup.

There are a number of advantages HDMI CEC provides. As previously mentioned, it allows for several global controls, allowing to more seamlessly integrate devices into a home theater system.

In order to take advantage of HDMI ARC, the devices must have HDMI ARC or eARC ports. Usually, configuring devices for HDMI CEC enables HDMI ARC along with it.

The primary drawback to HDMI CEC is the limitation of HDMI ARC to deliver full quality surround sound.

Setting up HDMI CEC varies from device to device. Usually, HDMI CEC settings can be found in the sound settings or system settings of the device’s settings menu.

Each of the devices intended to be connected with HDMI CEC will have to be configured independently.

If the system has HDMI 2.1a ports, HDMI eARC will be automatically enabled, and if any of the components aren’t compatible with HDMI eARC, they will revert to standard HDMI ARC.

How to Enable CEC (and HDMI ARC/eARC) on Popular TVs

Enabling HDMI ARC and CEC is different from manufacturer to manufacturer, but generally follows the same steps. Go to device settings, turn on HDMI ARC, and then the system may or may not need to discover other devices.

Here is how to set up HDMI ARC and CEC on five popular TV brands.

In some instances an app needs to be downloaded in order to set the device up for HDMI ARC.